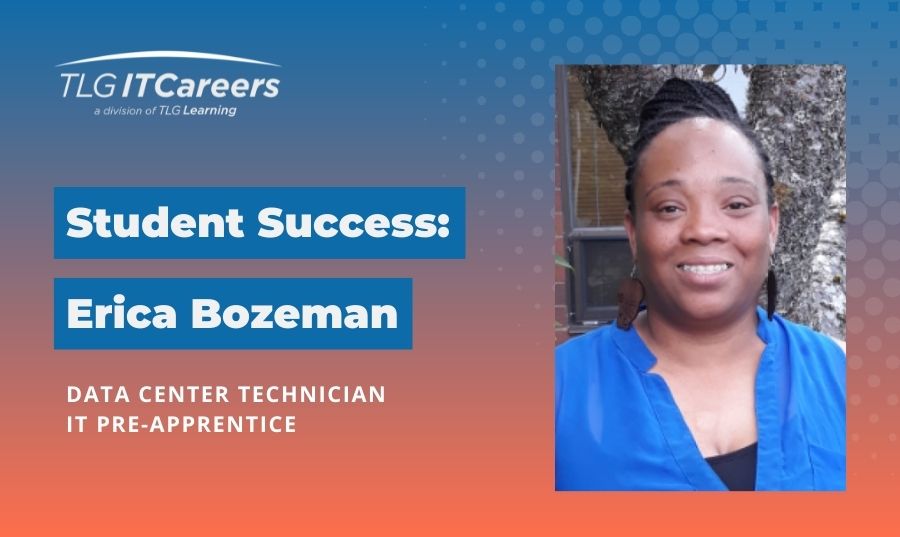 Georgia native Erica Bozeman served for 8 years in the United States Army before pursuing a career in IT. Stationed in Virginia and Washington, she quickly moved up the ranks while serving in multiple departments from Transportation to Deployment Readiness and Human Resources.

Throughout her military career Erica excelled due to her exceptional tenacity, work ethic, and customer service. Never one to rest on her laurels, Erica not only performed her job duties, but she also received a Bachelor’s degree in Criminal Justice, earned Commendation and Achievement medals, and attained top secret clearance.  She accomplished all of this while becoming a mother and welcoming her four sons into the world.

While working on her Bachelor’s degree, Erica discovered she had a knack and interest for information technology, but she hadn’t considered pursuing IT as a career until it found her.  While transitioning out of the service, Erica was approached by several IT employers, but nothing struck a chord.

Erica learned about Apprenti and TLG’s accelerated IT Program while at the Joint Base Lewis-McChord Transition Assistance Program and she decided to apply. She was selected as a TLG IT Pre-Apprentice and started with the Data Center Technician cohort which kicked off in Camp Murray, WA in March of 2019.  Shortly after starting the program, Apprenti and TLG partner employer, Amazon, reached out and offered Erica the opportunity to apply to their facility in Herndon, VA.

By June Erica had CompTIA A+, Linux+, and Network+ certifications. She also had a technical resume, a fleshed-out LinkedIn account, and relationships with classmates and instructors she’ll keep forever. Last but not least, she had a new career! Amazon flew her out to Virginia, interviewed her, and offered her a job as a Data Center Technician Apprentice.

Thanks to a healthy salary with a relocation bonus, Erica started her new job with Amazon in Virginia in July. It is difficult to imagine a more profound career pivot than what Erica has accomplished—Congratulations!