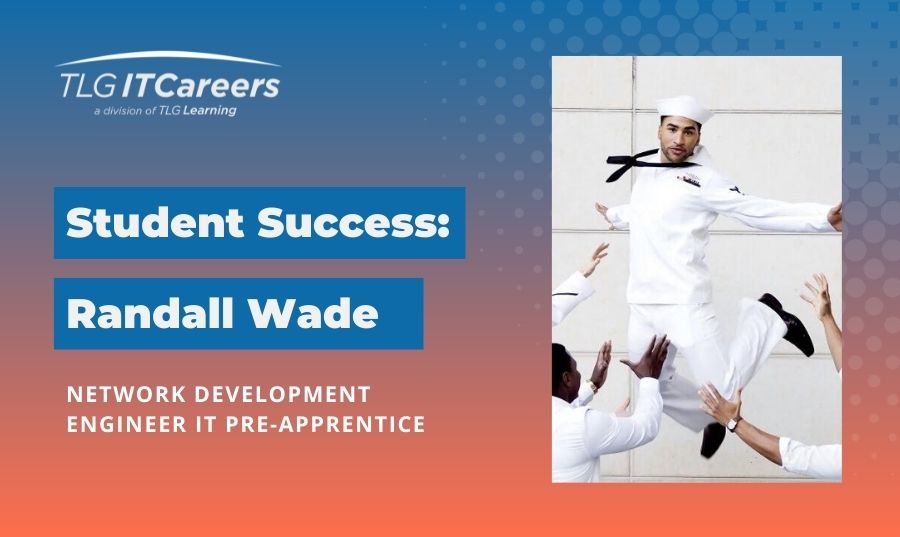 When Randall was growing up, his mom cared for him and his sisters by opening an in-home childcare center. Early on he was put to work as the kid who figured out problems and fixed them: applications, computers, connectivity—you name it! He had technical aptitude, but he also had a creative streak: studying Theater Arts in college and winning poetry slams.

This seems like an unlikely foundation for a future Navy Submarine Radioman, but that is where he launched his early career. He thrived getting to approach challenges with both logic and creativity. Five years later, he had been stationed in the Pacific Northwest, married, and with two young boys.

The timing felt right to transition out. Especially after seeing one of his buddies, Joram Howard, successfully transition into a demanding one-year tech apprenticeship with Amazon. Randall sought out Apprenti and TLG’s IT Pre-Apprenticeship—and he was accepted into the Network Development Engineer Pre-Apprenticeship.

Bringing the same rational and creative thinking he used in the service, Randall sailed through the material. Shortly after graduating, he was right on course with an interview scheduled for one of Amazon’s apprenticeships. However, these plans along with countless others were waylaid by the global pandemic and his interview was put on hold.

Undeterred, Randall used the time to keep practicing what he learned while spending time with his family. Between studies he played and cared for his young sons, recovering time missed from extended undersea deployments.

When Amazon called to reschedule his interview months later, he was happily surprised. He was also ready! He demonstrated to the team what he had learned from his Pre-Apprenticeship—and they offered him the role.

Randall is back on course and his career trajectory is better than ever! In October he started his paid apprenticeship via Apprenti at Amazon as a Software Development Engineer. TLG Learning is the training provider for his Amazon cohort, so we are delighted to see Randall’s wit and thinking back in our classes while he prepares for his on-the-job-training.

While the pandemic marches on, our veterans are still serving and then transitioning out into this world. We are grateful to help Apprenti and employer partners (especially Amazon) continue to meet them and help them develop and wield all their talents.