Army Vet Goes From Feeling Stuck to Thriving at Deloitte 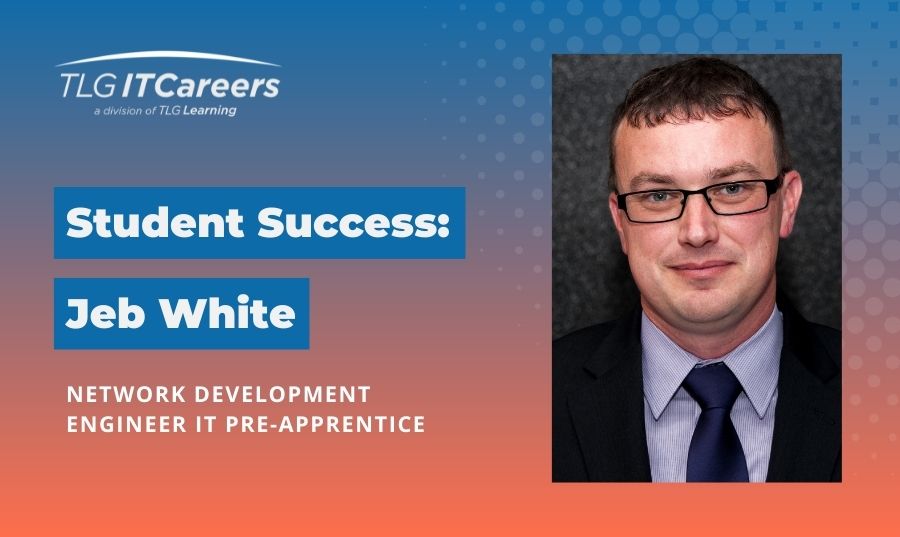 Do you ever feel stuck? Are you tired of doing the same thing every day, day in and day out? So was Jeb White.

After a little over 12 years of serving as an Army EOD Technician, Jeb went back to school and received his bachelor’s degree. He then started working at a property management software company offering technical customer support. He grew as much as he could in the role until he was maxed out – he even ended up learning some basic SQL coding.

With a home and family to support, he faced real tension between needing to pay bills and needing to actualize his professional ability. He began to struggle with doing the same thing every day in his job and wanted to expand his knowledge and gain some hard skills that he felt he was lacking in. While attending a Veterans Job Fair he met with Martin, Director of Career Programs at TLG IT Careers.

Jeb was reluctant about taking the leap into the program because he felt it was a big step to change from working his regular job into diving headfirst into training (and not “working”). After lots of research, planning, and consideration, he talked to Martin a couple of times to help quell his worries, and he felt he had no other excuses – it was time to take the leap.

He applied for and landed the Network Development Engineer IT Pre-Apprenticeship (NDE). From day one Jeb worked seriously on both the technical and the career curriculum. While he was completing his final project in NDE he was also interviewing with employers that TLG connected him with. Right after graduation, Jeb had an offer in hand from Deloitte – a more than 30% bump in pay!

What was the biggest challenge for you during the Network Development Engineer (NDE) IT Pre-Apprenticeship?

I am on the East Coast so the timing of the course made it a little challenging to parent on an altered schedule. Most of the challenges were away from the course itself. It was more just scheduling and getting all of those things taken care of.

What did you enjoy the most during the program?

I actually enjoyed the parts of the program I was uncertain about previously. Before using it, linux reminded me of the MS-DOS prompts from some of the earlier computers that could be a pain to learn on your own. I was also not sure I would like Python because my only programming experience was SQL, which can be a little challenging as your first programming language. However, these were my favorite parts because of the flexibility and the different things you can do with them.

What would you say to someone considering joining the program?

It is a good mix of book and practical knowledge. You will definitely learn a lot and these skills can open many different doors for you.

If you had one piece of advice for someone considering this program, what would it be?

Start networking early. Follow social media accounts of those in the field you want to go to. Reach out and talk to those in roles you strive for and talk about things that can help you. There are quite a few organizations/groups out there that will help with this for veterans and non-veterans.

Why did you make the decision to join the Deloitte team?

I decided to join Deloitte because of the opportunities for growth and change it provides. Before taking the NDE course, I would have laughed at you if you said I would take a developer role of any sort. After learning a little of BASH in Linux and then following that up with Python, I realized how much I enjoyed seeing how things work. I also enjoy being able to create, fix and modify the design of programs and webpages.

How has shifting to a career in tech changed your life?

It has opened up the doors of growth. There are so many things to learn and adapt to. Since the environment is always changing, the growth never stops.

We couldn’t be more excited for Jeb and what his future holds for him. Congratulations, Jeb!

To learn more about your IT Pre-Apprenticeship options visit our site or schedule a meeting with one of our Educational Consultants to discuss your unique needs and determine if an IT apprenticeship or pre-apprenticeship is right for you.