Are you interested in an IT apprenticeship? Maybe you want a career in the cloud? Whatever your career goals are, we’re here to help. Check out our lineup of FREE webinars to help you hit the ground running.

Register to save your seat! Can’t attend live? That’s ok! Sign up anyway and we’ll send you a recording of the webinar. 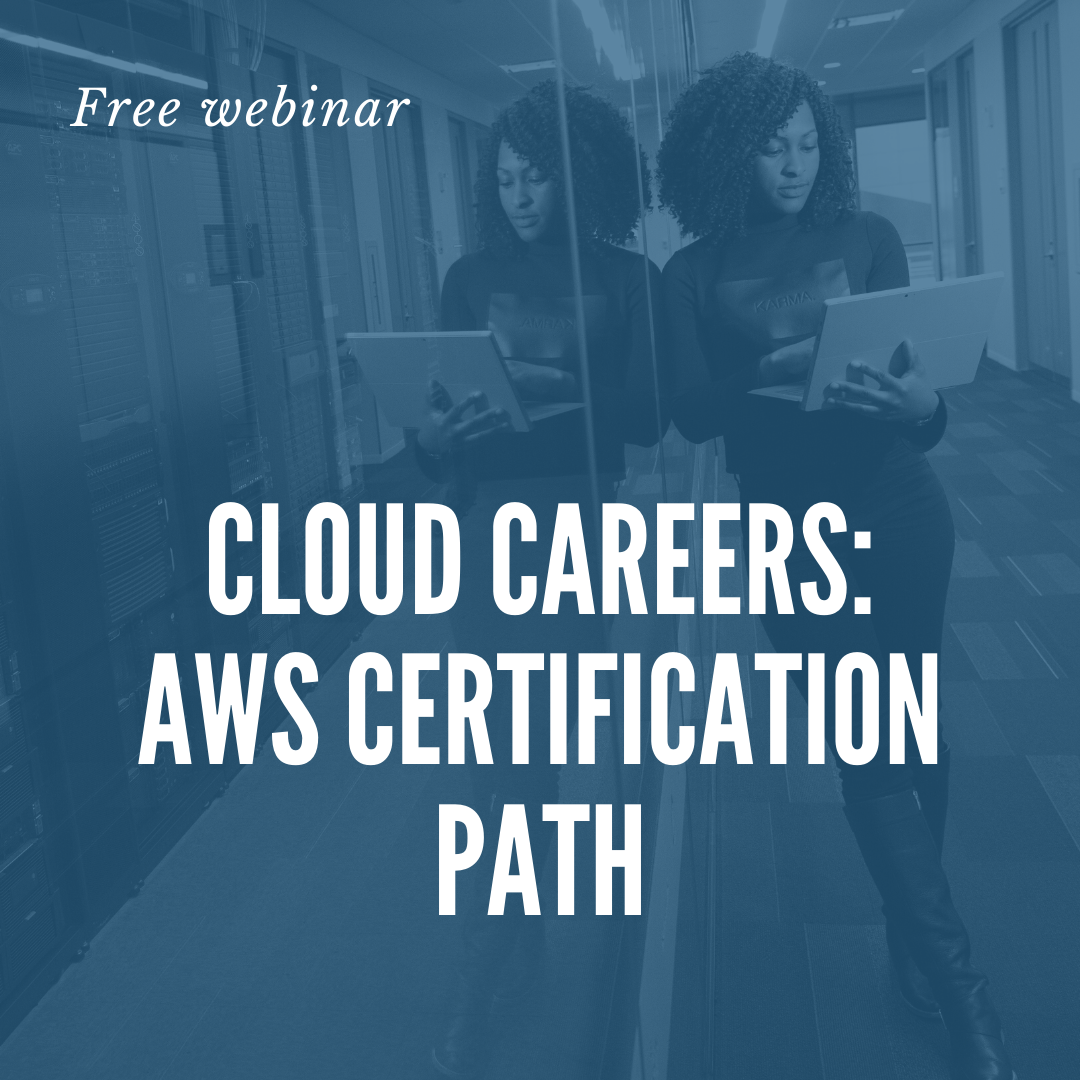 Learn about this new program that gives someone with network skills, the ability to update their cloud skill and enter a career in the cloud!

With more than 27,000 Amazon Web Services IT jobs posted in Washington state alone* during the last 12 months, TLG Learning has introduced a new program that gives someone with network skills, the ability to update their cloud skills and enter a cloud career.

Join our team as they talk about IT certifications, why AWS, different AWS certification options, and why choose this program? They’ll answer any questions you may have about a cloud career. 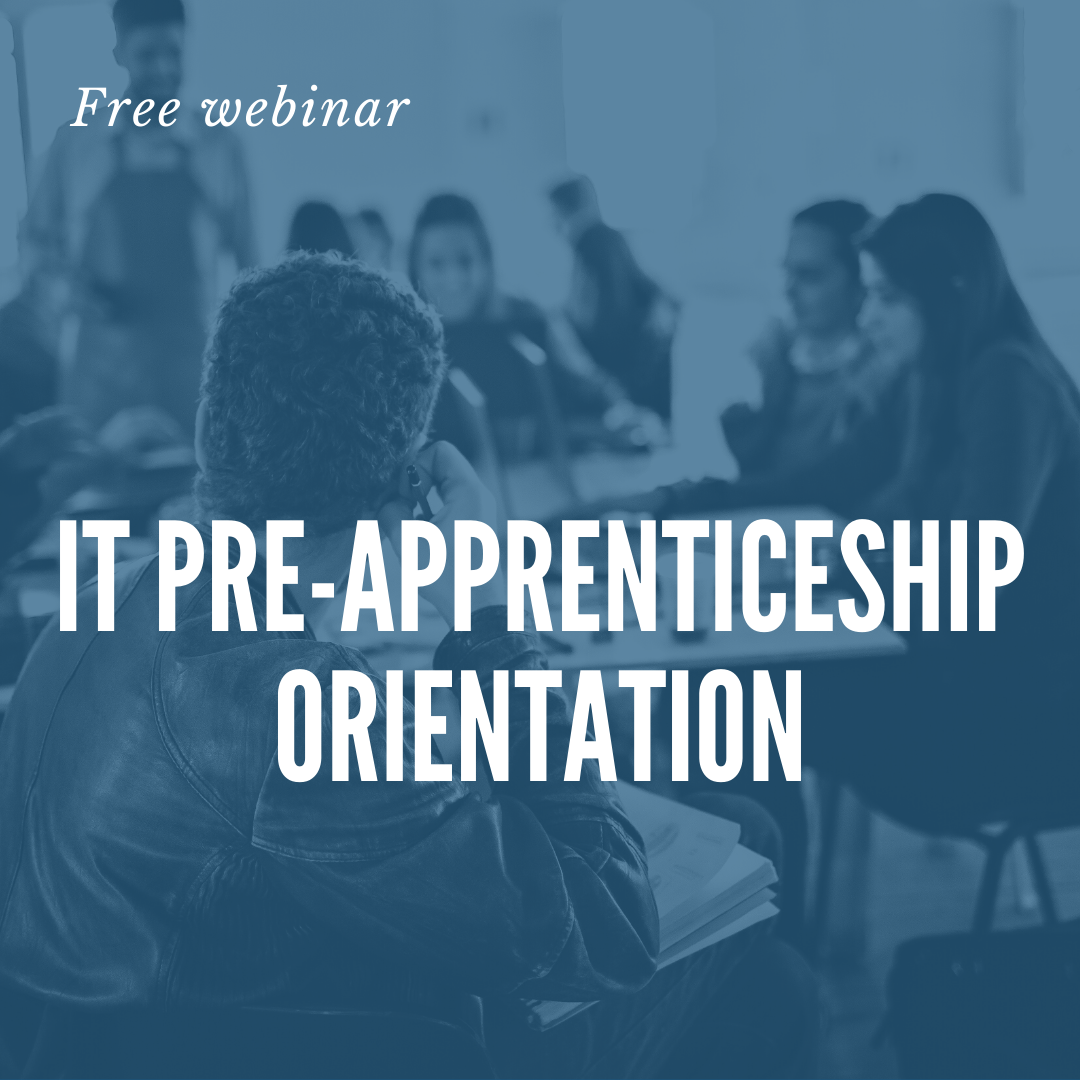 Learn how TLG IT Career’s IT Pre-Apprenticeship can help you transition into an IT Career.

Take a deep dive into how the Apprenti Apprenticeship and TLG Learning IT-Pre Apprenticeship fit together; what other IT Career opportunities it will open the door for; and who is a good fit for the program, along with time for Q&A and more. Join our Director of Career Programs, Martin Sehlin along with our Career Training Program Manager, Ed Chloe as they cover what is a pre-apprenticeship? what happens after pre-apprenticeship? the application process, success stories, types of careers, and more!

Ohio native Timothy Cowan joined the United States Air Force shortly after high school.  The Air Force leveraged his sharp mind and knack for systems and troubleshooting by training him in avionic maintenance. He was assigned to Joint Base Lewis McChord (JBLM) and he had the good fortune of his wife accompanying him to Washington state. He ensured planes stayed safe in the air, defending our country for four years.

As his service began to wind down, Timothy reflected on what he loved most about serving in the Air Force—working with technology as part of a team. While he loved these aspects of serving, he and his wife longed for their home in Ohio. He looked for a program that would help him get into tech and hopefully, do it from Ohio.

He found that Apprenti could help him land a tech apprenticeship. He could transition into Apprenti from JBLM because it was based in Washington, better yet, it had spun off into more than a dozen other states including Ohio. Timothy’s Apprenti score, his location, and the timing were perfect for him to move into TLG’s IT Pre-Apprenticeship while transitioning out of the Air Force. He started the Network Development Engineer cohort in Camp Murray, WA in September of 2019. By February, he and his wife were driving back to Ohio and resettling.

While the pandemic took hold and the country began shutting down, Timothy’s completion of the Network Development Engineer program positioned him to interview with Apprenti in Ohio. He interviewed for a Software Development Engineer apprenticeship with Kroger and by May he started training in coding.

This August, Timothy started his on-the-job training with Kroger! Now, Timothy is on a team of software engineers using their sharp minds to develop features and optimize Kroger’s mobile shopping tools. As with his time of keeping planes in the sky through avionics, he’s now helping to keep commerce flowing with applications and tools.

Thanks to Apprenti and their Ohio franchise, employers like Kroger have been able to nab talent like Timothy and put them in hard-to-fill software engineering roles.  Timothy’s soldier to software engineer transition took less than a year, despite interruptions and the complications of the global pandemic.

Army Pilot Makes His Way Into The Amazon Cloud

As a child, Luke Thompson competed as a gymnast.  The early discipline and physical fitness paid off when he enlisted in the Army.  He set his sights on Special Forces and was selected for training.

Family on his mind, he set aside his Green Beret aspirations and opted for flight school. He served the remainder of his seven years of service as an Aviation Officer flying scout helicopters.

As their family expanded with a second child, the civilian-life pull became irresistible. Luke hung up his rotors and settled with his family in sleepy central Oregon. Though the location was idyllic, it presented a problem: what to do for a career?  He attended school full time after leaving the military, trying to find his calling again.

He studied everything from Fire Science to emergency medicine and pre-med Biology. Since he always loved technology and figuring out how things worked, Apprenti caught his eye when they were mentioned in Army Times.

He had a feeling he could make his way in tech, so he started the assessment and application process. By January of 2020, he was in Camp Murray, WA beginning his three months of training as a TLG IT Pre-Apprentice in the Network Development Engineer program.

A month into Pre-Apprenticeship, the global pandemic hit with cascading effects on in-classroom training. For Luke, it meant quickly rejoining his family in Oregon and endeavoring to complete the training online from his spare bedroom.  This mighty veteran thought nothing of it.

Luke graduated from Pre-Apprenticeship in April, but not before landing a coveted Software Design Engineer Military Apprenticeship with Amazon Web Services (AWS). Thanks to the offer from AWS, Luke and his family relocated and resettled in Washington. Here he continues his remote training and will soon move into his Software Engineering role at full stride.

Apprenti and Amazon’s AWS Military Apprenticeship shrewdly opens doors and creates pathways for talent and grit like Luke’s to come solve the challenges of the tech sector. Through this, Luke has found his calling again.

“There’s no finish line in a Tech career”

Kushal traveled from Nepal to East Texas to study and earn a B.A. in Journalism, after which he got enlisted in the United States Army. They assigned him to logistics, stationed him in Alaska, where this braveheart served for the next 4 years.

Kushal transitioned out of the service at JBLM in May of 2019. Transitioning in such close proximity to Seattle’s thriving tech sector, he realized a career in systems and software was attainable. In September 2019 he was accepted into TLG Learning’s IT Pre-Apprenticeship where he went from zero-to-sixty on Network Design Engineering fundamentals including Linux, Networking, AWS Cloud Practitioner and Python Scripting. By February he landed a contract working in one of Amazon’s Data Centers and by March he landed one of Amazon’s coveted Software Development Engineering Apprenticeships. This time he is going from zero-to-sixty on Data Structures, Algorithms, Java, and JavaScript.
Here’s what he has to share about his meteoric pace:

Why did you select TLG’s IT Pre-Apprentice program?

I came across TLG’s IT Pre-Apprentice program during a career fair session at JBLM. I found the program straight forward and had a very high job placement rate in the state. Besides, one of my friends who is also a military veteran had successfully transitioned into the civilian workforce through this program.

What has been the outcome (thus far)?

I’m currently a Software Development Engineer Apprentice with AWS. It has been a complete honor to work with talented AWS apprentices and learn new applications and language every day.

What advice would you offer anyone considering this track?

Tech is a great career and its constantly evolving. I will advise anyone to start from the basics and start learning because there is no finish line in this career. We all are in the same boat.

If you’re looking to transition into a career in IT, schedule a call with our team or click here to know more about our IT-Pre Apprenticeship Program!

A Veteran’s Journey From Army To Amazon

Today Shreeja is busy training for her AWS Solutions Architect Apprenticeship with Amazon.  How did she get here?

Interested in understanding the human mind, she studied Psychology in college.  With her degree in hand, she found herself drawn to serving in the United States military. Upon enlisting in the Army, she was assigned to Logistics. There she developed skills that would be useful in her future: service-orientation, multi-department liaising, and managing finite resources with creativity and ingenuity.

TLG Learning is honored that she selected our program and it is a privilege to help talented veterans like Shreeja launch into coveted apprenticeships.

John Hession won’t be outworked. He took this ability to college and earned a degree in History, but he wasn’t sure what to do next. High school buddies of his who’d gone into military service told him to come and join them, and he did.

John enlisted in the United States Army and earned the right to serve in the elite and notoriously tough Rangers. John enthusiastically served five years as an Army Ranger, including service in Afghanistan, and ultimately depositing him in the Pacific Northwest’s Joint Base Lewis McChord.

When the time came to either re-up or separate from the Rangers, John decided to seek out the next chapter in his life. With no real private sector work experience, he was lucky to make a connection with a local contractor. He worked in residential construction and framing while keeping an eye on his options. He learned that his boss had transitioned into construction after a successful career in tech.

The possibility of going into tech sparked John’s curiosity, and he started to look for paths for veterans to get into the field. After much research, he found Apprenti and TLG’s IT Pre-Apprenticeship to be his best bet.

John joined TLG’s Network Development Engineer Pre-Apprenticeship in September 2019. Despite having no technical experience, John was able to apply the abilities that had served him as a Ranger – grinding through the challenging program despite the stressors of a career change and move over the holidays.

John’s work ethic and determination paid off, and in January 2020, he was rewarded with a new tech job! John is a perfect example of the success that awaits those who are ready to work through the Apprenti and TLG IT Pre-Apprenticeship program.